This pup is taking over our life. And our finances.
Posted by KT My Lady at Thursday, October 27, 2011 1 comment:

Email ThisBlogThis!Share to TwitterShare to FacebookShare to Pinterest
Labels: Lucy 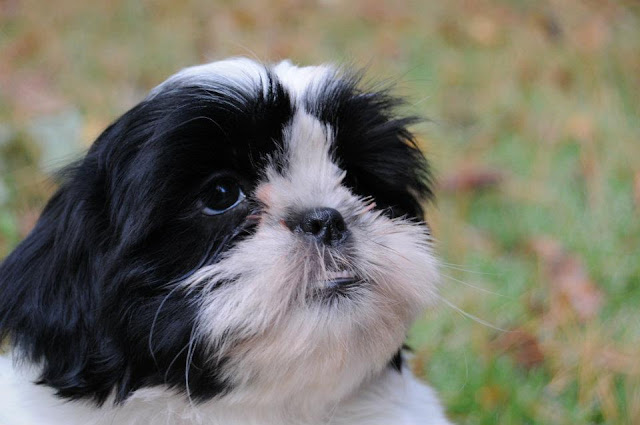 Meet the newest member of our family, Lucy the Shih Tzu! We are very proud parents.
Posted by KT My Lady at Monday, October 24, 2011 2 comments:

The Sass is Back

I'm a Southern woman, born and raised. This surprises a lot of people I meet primarily because A) I don't have the accent and B) I like to say fuck a lot. This wasn't always the case. Back in high school, I was a Bible Belter, goody two-shoes like most of my friends.

That all started to change ironically when I went to divinity school in Connecticut. People were abrasive and direct, which at first I found rude but then came to appreciate. There was no bullshit. Sure, I missed the friendliness of saying 'hi' to people on the street, but then again, there were so many pedestrians I could've spent my entire walk to campus greeting strangers. Instead I learned to look inward and found quiet and stillness.

I also developed quite a bit of attitude. Since my birth, my mom had taught me the passive aggressive ways of southern culture--that you ignore cat calls and kill rude people with kindness. As it turns out, these are not particularly satisfying strategies for dealing with assholes. I always felt disempowered and wished I'd been quicker with my tongue.

At some point, things shifted. I started with a few mouthy comebacks to men who would whistle or say something inappropriate to me on the street. One night I was coming home from CVS when a man in a truck said, "Hey there, sexy." I walked a few steps and yelled back, "Why don't you shut the fuck up!?" He probably thought I was a crazy bitch, but I felt this awesome rush of adrenaline and felt proud that I'd managed to make him, well, shut the fuck up.

Now after six years of living elsewhere, I'm back in the South and experiencing severe reverse culture shock. It first struck me when I went to a Zumba class at the gym and realized I was the most gyrating one in the class (something that NEVER would have happened in DC). I've changed and I'm not sure I can adopt the southern lady thing again.

The other day, Carolina Man and I were out playing bocce and throwing a frisbee at the park. A man walked by us, and remembering that I was in the South, I made eye contact and said hello. He replied, "You know, you really should use your arm more and your wrist less."

And without even thinking, I retorted with annoyance in my voice, "Thanks, but I didn't ask you." It wasn't rude exactly, but it was direct and it sent a clear message that I didn't appreciate his unsolicited advice about my frisbee throwing ability.

My mom probably would've died with embarrassment if she'd heard me say that. She would have preferred I'd feigned politeness or even gratitude, and then talked behind his back. Instead I said what I felt. And it felt pretty awesome!