First of all, thank you all for your wonderfully sweet messages of congratulations! It has been overwhelming to receive so much love from you. I couldn't be happier!

After eating one too many chocolate croissants, I opened up the card marked "PPD: One."


Your first activity of the day is shopping! Your driver will be picking you up at 9am and taking you to Southpointe Mall.

As the day will be ending at a 5-star restaurant, please put on your shopping list a nice evening dress that you can wear tonight.

Please arrange for your driver to pick you up at 11:45 am at which time you can open your next envelope.

Oh, and here's some shopping cash!


Shopping? Five-star restaurant? Driver? I was completely overwhelmed! I started tearing up. I couldn't believe by how much thought he'd put into the whole day. He knew I'd want something new and gorgeous to wear for our very special dinner planned.

Through the tears I asked, "Are you coming with me?" I was a little sad when he said that he probably wasn't.  I realized that he probably had other things to do, and I knew that no matter what, I was going to enjoy shopping for a dress.

A few minutes later, I heard CM go to the front door. And in walks...MY MOM! I was so overwhelmed and shocked and happy that I burst into tears. (Mom told me later that Carolina Man had tears in his eyes, too.) She gave me a big hug and said, "We're going shopping!"

Once I pulled myself together and cleaned up the streaks of mascara running down my face, we walked outside to find a Lincoln Town Car (my mom kept calling it a "limo" which cracked me up) waiting for us. Carolina Man had booked a driver to take us everywhere we would need to go that day. How spoiled am I?

And off we went to the mall to find the perfect dress for that evening.

The Proposal: Part One

I gave you all a snippet of the first part of the day, but here's a more detailed account for your reading pleasure. Oh, it's going to be so much fun reliving that day.

Although this may appear to be a scavenger hunt or a treasure hunt, it is neither. This is what I like to call a P.P.D. or Progressive Pampering Day. I like to call it that because I just made it up and find it to be quite clever.

Today is all about you. I want to show you how special you are to me by giving you a much-deserved "you" day. You will have fun, relax, eat well, and be generally pampered.

The progressive part is that your destinations will be revealed throughout the day vis a vis these envelopes. No peeking!

Get ready, destination one will be revealed right now.

I came downstairs to find three plates of chocolate croissants (homemade by Carolina Man, and in milk, semi-sweet, and dark varieties), a pot of hot coffee made just the way I like it, and two beautiful red roses in a vase.

And of course, the next card, which I'll reveal next time!

He put a ring on it! 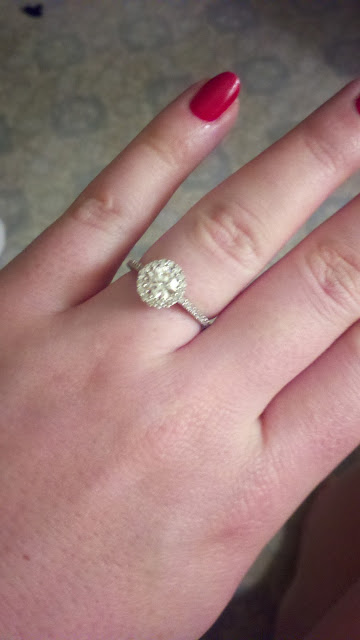 Good morning! I woke up to a cup of hot coffee and the first envelope with PPD ready to be opened.

It means "Progressive Pampering Day" and it's a day that Carolina Man has planned to take good care of me. I have no idea what I'll be doing, but it'll be a day of relaxation, I'm sure.

The Mysteries of PPD

You guys, what do you think PPD means? Here's what I've come up with so far.


Ok, these are all ridiculous. Let me give you the context.

For months, Carolina Man has been playing a weekend getaway for us, and has told me nothing about it other than a few very vague details about what time we'll begin tomorrow (7:30 am) and that our destination is less than two hours away from our house. Then yesterday, he hands me 6-7 sealed envelopes that have the letters "PPD" on them, numbered and with specific times written on them that I will open tomorrow.

I can't believe he's done so much to plan for this special day together! I have no idea what we'll be doing, but I can't wait to find out. And of course, I'll make a full report once I know what's going on!

The #1 Reason (Right Now) I Can't Wait to Get Married

Because hopefully then all of the sweet church ladies I meet across the country will quit asking me if I want to meet their very handsome grandsons.

Any takers? I'd be happy to pass your name along next time.
Posted by KT My Lady at Wednesday, January 25, 2012 2 comments:

Greetings, loved ones! From...Leisure World. I kid you not. I am staying in a place called Leisure World. Never heard of it? Neitther had I, mainly because my grandparents didn't live long enough to settle down in a place like this. But basically it's a massive complex for retirees that looks a little bit like army barracks.

Why am I staying here? Because I have an 84-year-young friend named Mary who A) insisted I come to California to speak at approximately 542 engagements over the course of five days and B) insisted I stay with her while I'm here. She also insisted that she drive me everywhere, which let me tell you has been an *experience.* I may have thought I was going to die at multiple times while driving on I-610 to Claremont.
When we stopped at a gas station on the way (not to get gas but because she ate cheese on her burger and well, it wasn't agreeing with her), I said to our other travel companion that I was terrified, especially when were driving 40 miles per hour when the speed limit was 70. But somehow we have gotten from point A to point B in one piece. So far.

Despite the excitement of highway driving with an elderly person, I am just tickled at how I've gotten to be friends with someone who is in her 80s. My grandparents died relatively young, so it's been awhile since I've gotten to talk to someone who remembers the Depression. And this woman is still kicking ass. She's involved in about every social justice movement you can imagine, and she's completely independent, albeit a scary driver. But, hey, there are scary drivers at every age, right? I'll forgive that one.  I can only hope to be as agile and spunky as she is in another 50 years.

I have to say, this is one of my favorite things about my job. I've gotten to know people from so many different places, from so many different backgrounds, and really, they've become more than colleagues--they're actual friends that I get to visit and laugh with. So while I may still be struggling to find a network of folks in NC, I've got a helluva lot of friends all over the country. And that's a pretty awesome thing. It makes being away from Carolina Man just a smidge easier.
Posted by KT My Lady at Sunday, January 22, 2012 3 comments:

Email ThisBlogThis!Share to TwitterShare to FacebookShare to Pinterest
Labels: Travel

I would become domesticated for this. 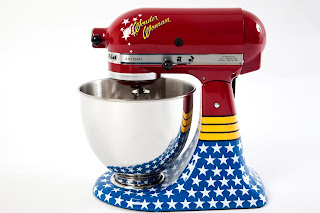 A Wonder Woman KitchenAid mixer? Holla! Apparently this is being sold in Brazil, but I sure hope they wise up and bring it to the States. If not, it might be time for a little jaunt down to Rio.

Future wedding gift anyone? Anyone?
Posted by KT My Lady at Thursday, January 12, 2012 2 comments:

So, maybe I'm a little late to the game on posting this, but hey, I'll bet some people have already broken, if not forgotten their resolutions altogether. Frankly, I'm hoping some of the January, New-Year-Resolution-ers who are early morning gym-goers and use all of the good treadmills will be among them soon. I need that prime location right in front of the TV playing the Today show. How else am I going to stand 30 minutes on a stationary bike?

I actually don't have any real resolutions this year, but I do have a few things I'd like to stop doing, ranging from silly to serious. Here they are.

No, I'm not that Fergalicious. But I do fly a crazy amount for work, so much so that I'm now Silver Preferred on US Airways.

It's funny that free checked bags are a perk now. Remember when they were free for everyone? Well, now if I want to check something, I can do it for free. Just like five years ago. Even better, I get to board earlier, which means I won't have to check my bag because I'll get to stow my bag before all of the assholes with their giant-ass bags take up all the room. (I promise, I have a very small carry-on, and if we're on the same flight, I would be happy to assist you in shoving your oversized bag into the bin.)

But best of all? Complimentary upgrades! Just yesterday I got an email saying that I'd gotten upgraded to first class on my flight back from DC. I'm in seat 1A. 1A! The first seat on the plane! Perhaps I'm overly excited by this, but if you fly as much as I do, you'll understand that this is something worth celebrating.

Maybe this will make me hate US Airways a little bit less now for losing my bag every time I fly.
Posted by KT My Lady at Monday, January 09, 2012 2 comments: