Being the Easter Bunny

As the youngest of my family, I got spoiled with many post-childhood years of things like Santa Claus gifts and visits from the Easter Bunny. In fact, these rituals continued well into college as my mom struggled with her empty nest. Then my nephew was born, and it all went out the window. Damn kid.

I get it. These holiday rituals go from getting as a kid to giving as an adult, but what about in the in between when you're a childless adult?

Behold the return of the Easter bunny, at least in our house. Carolina Man and I decided to give each other Easter baskets, which ranks up there as one of the best ideas of all time. It's a gift to have a partner who gets excited about silly things like this, and is just as excited to put together a basket for me as he was to get his.

The only trouble is that we're both on a health kick (down 10 lbs and 7 lbs respectively!), so the abundance of candy options presented a problem. We took different approaches (I bought a little, he bought a lot), but I've been amazed by the restraint we've both shown. Granted it's required stuffing it all into a shoebox that is under a number of other things in our pantry, but despite working from home with the knowledge that there is candy galore available at all times, I haven't touched a single piece before 8 pm. You have no idea how amazing this is.

But, I just loved that we reclaimed the fun of the holiday for ourselves. We sipped on mimosas, made brunch, and watched TV. It was the perfect day. Isn't it fun to have your own family and do whatever the hell you want?
Posted by KT My Lady at Wednesday, April 11, 2012 5 comments:

"I think you're putting on an ostentatious display," my uncle said, as I poured him another glass of wine. We had invited him and my sort-of-aunt over for a Saturday dinner. He was asking about wedding planning (i.e.  interrogating me unfairly about how much our wedding was costing), and that was his response. I wanted to slap him. He--the man who drove a Porsche for years (and eventually traded it in for a BMW to be more practical), who flies first-class to Barbados with his live-in ex-wife for weeks at a time several times a year, who lives in a house more than triple the space and bedrooms he needs--was calling something that hasn't even materialized ostentatious, a word dripping in judgement and condescension.

I felt scarily defensive. First of all, our wedding will be far from ostentatious. How could a wedding with 50 people, locally-grown flowers, and, very possibly, a pizza bar (albeit probably gourmet) be over the top and showy? All along we've said we want fun, intimate, classy. But never showy.

But, here's the thing: even if it were, it's none of his goddamn business. Or anyone else's for that matter. Carolina Man and I are footing the bill ourselves, so we get to decide if we want to spend under $1K on local flowers instead of tropical ones (we are) or $10K for a kick-ass venue (we are) or host our rehearsal dinner at home for practically nothing (we are) or whatever we want with the budget we set. These are our decisions to make.

For people pleasers like the both of us, though, that's easier said than done. It's tough to stand in the face of criticism concerning important life decisions and not want to strike back, not defend the decision as if doing so would change the other person's view.

When it comes to weddings, I think we've all been socialized to think that everyone will magically be a better version of their selves for the benefit of the bride and groom. Oh, wouldn't it be nice if this were the case? But so far I can already tell you that it isn't true. My mom will still be opinionated (but helpful!). My uncle is still judgmental. And I still care what everyone thinks.

That last thing is the only part I have any control over: choosing to let what others say determine how I feel about a situation. Moving forward, my goal is to take such comments with a grain of salt and consider the source. My uncle? Lives with his ex-wife. Who refuses to marry him again. Not exactly an ideal go-to source for how to do things in the romantic arena. But in the end, he's family. And you'll bet he'll be enjoying his gourmet slice of pizza as much as the rest of 'em (even though he'll probably never admit it.)

When I was single, I gave up watching wedding shows in order to maintain my sanity. But, since getting engaged, I've gradually taken more interest DVRed every wedding show on TLC and WE and consumed most of them. Last week I was home with a cold and watched about eight episodes in a row of David's Tutera's My Fair Wedding.

For those of you unfamiliar with the show (and I applaud you), David Tutera is the wedding planning knight in shining armor who comes in to rescue a wedding that's inevitably going to be a train wreck. At least that's how it's  staged. Then he works his magic and creates a kick-ass day for the bride...but the groom? Not as much. Other than an initial handshake and the rote line of "whatever makes her happy," the groom isn't involved at all with the wedding planning. He isn't even asked if he's interested in giving input. It's just assumed the bride is the one calling the shots, because she's the only really invested in the day.

This is really problematic for me. And I'm finding it's much more ubiquitous than just on tv wedding shows.

Why is it assumed that the bride is only one who cares about the details of the day?

I'll give you an example of how I've encountered this. Carolina Man and I have been splitting up wedding planning tasks haphazardly--I'll call a DJ; he'll contact a photographer, etc. So far, the florist and the photographer we've chosen are ones I contacted. On every exchange we have, I include CM on the email chain, but each and every time, they only respond to me. And on one contract, only my name is listed.

This may be customary, but that doesn't make it good. Planning a wedding is a huge undertaking, and so far I've found it to be helpful in working through conflict, differences of opinion, and varying priorities. Sure, it'd be easier if on any given decision, one person backed out and let the other decide. But, what kind of precedent does that set for the future?

Carolina Man and I are in this together, and that means in all of the little things of life. Leaving each other out of our thinking and decisions is no way to build trust and partnership. So, wedding people, I ask you, please include the grooms. It's their day, too.
Posted by KT My Lady at Wednesday, April 04, 2012 5 comments:

Happy April, everyone! Have you gotten fooled by anyone? Let me just say how annoying I find the whole April Fools' Day thing, probably because it's too reminiscent of growing up in a house with two older brothers--where everyday was an opportunity to trick me.

But, wedding planning is no joke! Carolina Man and I are moving right along. Believe it or not, we managed to book both our photographer and our florist in the same weekend. Sometimes things just work out that smoothly and easily.

Flowers are not a number one--or even a top five--priority for us. We see them as a way to accent the celebration, but not as the focal point. So, when we found a florist who grows all of her own flowers in her backyard garden and specializes in more understated, yet beautiful arrangements, we knew we had found the one.

Here are some samples she sent us this week. 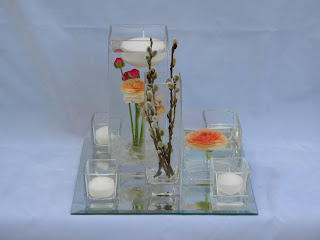 We are going to use pin-lighting in our reception room, so we wanted something with a lot of glass to reflect the light back. I love the simplicity and sleekness of these, and how no one will have their view blocked at the table. I'm thinking of asking her to maybe put some other blooms on the mirror, so it doesn't look as stark. 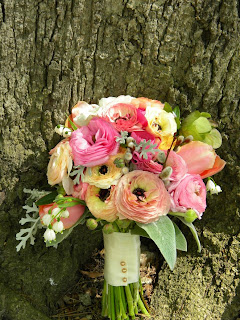 And I just love this bouquet! It's beautiful, and the colors go together so well.