Don't Be Tardy for the Party

My bestie from childhood invited me to ring in the New Year in the ATL. Rather than dropping $100 on tickets to some overrated NYE party, we decided to get our club fix last night at Tongue and Groove in Buckhead. Turns out, we weren't the only ones with this bright idea and ended up waiting in line, shivering in the cold for a good half hour. Why they wouldn't just let everyone in, I don't know. Let's be real; this is Atlanta, not New York. The club was next to a damn Taco Mac and a Five Guys.

Once we finally got inside and avoided paying cover (thanks to a bartender who'd put our names on the list), we waded through the sea of peeps who were, despite rocking music, just standing there. No one except the scantily clad cage dancer was even doing so much as a fist pump. People were just milling around, overpriced drinks in hand, looking like middle schoolers at an overcrowded, smoky sock hop. My bestie, a light weight, and her friend did two shots in a row, so I figured someone ought to stay sober.
We managed to find a spot upstairs to dance. Naturally the douchebags began to pounce. My friend, newly single and a total hottie, was deservedly getting a lot of attention--just not from very nice dudes. My overprotective side came out when one persistent asshole kept grabbing her, even after I pulled her from him away three different times. I yelled in his ear, "She doesn't like you. Go away!" He grabbed her again, and that was it. I was PISSED. I pushed him off of her and shrieked, "STAY THE FUCK AWAY FROM HER, ASSHOLE!" My bestie's friend turned to her and said, "I like her." 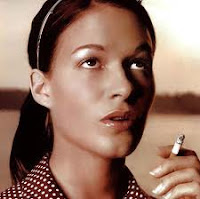 Eventually we found a better spot to dance. One stumbling drunk told me I look like the girl in the Bourne Identity. I told him I live in DC. He said, "Oh, so you must work for the government?" "No, actually I don't." "Good," he replied. "One less person to pay."
Being the sober one in a crowded, smoky club isn't the most fun thing in the world. But the other two were having such a good time that I just had to laugh and join them in dancing up on one of the stages. That's when I realized we were almost at eye level with the DJ, and I realized this was my chance to redeem the night. I was going to get this guy to play my favorite song. I started shouting, "Ceelo! Ceelo!" I made a pathetic attempt at sign language, forming a "C" then an "L" and then an "O" with my hands. He still didn't get it. So, I flicked him off with two hands and mouthed, "Fuck you!"
Hmm. Maybe should have thought that one through first. Quickly I shook my head and said, "No no no!" and did the pathetic sign language again. "Ceelo! Ceelo!" "One minute," he mouthed back. Song after song played, but no Ceelo. The music began winding down and they did a "practice" countdown for NYE. I thought all hope was gone...and then "Fuck you" came on. I started jumping up and down, both of my hands flicking the crowd off and acting a fool as I blew kisses to the DJ, my new best friend.
Who cares if I was sober, had to deal with asshole guys, and got cigarette smoke in my hair? I managed to get the DJ to play the best song of all time. I call that a good night.
Posted by KT My Lady at Friday, December 31, 2010