Confessions of a (Not So) Clean Freak 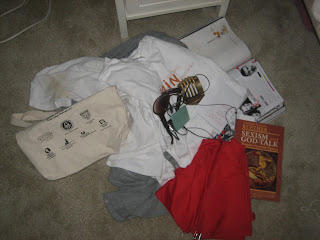 For the first few weeks of living together, SCL and I were naturally on our best behavior--putting our stuff away, cleaning up the hair in the shower (mostly me; I shed like you wouldn't believe), and generally trying to avoid our bad behaviors when it came to keeping a clean place. Of course that didn't last too terribly long. We are human after all and no amount of willing would keep our bad habits at bay forever. Hence, exhibit A-->

This is a pile o' stuff next to my side of the bed that no matter how I try to keep under control always seems to recreate itself anew each day. I took this pic a few days ago. Looks like that days pile was made up of a t-shirt, pajama pants, umbrella, tote bag, open ELLE magazine, iPod, hair clip, sunglasses, and of course, Rosemary Ruether's classic Sexism and God-Talk. When I sheepishly admitted to my ever-growing pile o' stuff, SCL said, "Yeah, I'm always afraid I'm going to step on your phone in the morning." As it were my phone was in another spot on the floor, which I blame on me not shoving it off the bed along with all the other crap before getting under the covers. It probably went flying the first time one of us tossed or turned.

This pile is pretty much the only chaos I allow in my home life. I am generally clean (not an innate quality but one I have developed over time, which I think makes me even more controlling about it.) But this pile I just can't seem to rid myself of. Doesn't help that I'm getting home later and later most evenings and just don't give a damn about putting my stuff away. I guess letting my hair down is a good thing, but it's hard to let another person see all your crap, literally or figuratively speaking.

But mess or no mess, I have a partner who loves me just the same--and who will try his best not to step on it.
Posted by KT My Lady at Monday, September 07, 2009