Can I Go Home Yet? Because I Really, Really Miss My Bloggy Friends 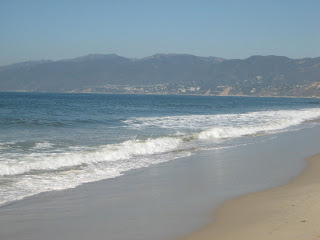 Isn't that beautiful? That is lovely Santa Monica.

Too bad we're now in suck-ass DALLAS. This final leg of the journey has been a total fucking nightmare so far. So bad, in fact, that our hotel is comping our entire stay. Yeah, that's how much they fucked up. I am sleep deprived, jet lagged, and cranky. Thank God this is the last place I have to go, except for Philadelphia on Saturday for a wedding. Then when I return Sunday, I will be having a several day affair with my bed.

But, there is good news to report! In the less than 48 hours that I was back in DC for a board meeting, Dr. Nutrition and I had our sixth date. Yep, believe it or not, my crazy did not scare him off, at least not yet. He was even kind enough to come all the way to where I live in Arlington, and with a bottle of wine in hand to boot!

I tried really, really hard to rally like a champ, but I was still on West Coast time and feeling exhausted from the jet lag. We went to karaoke for an hour or so, and then headed back to my place. I realized how fucking crazy I'd been a few weeks ago to make up this story in my head that this guy had just stopped liking me. I guess when you don't see someone for several weeks though, it's easier to think that something is wrong. Nothing better than a little in person reassurance, if you know what I mean.

As we were spooning, I told him that I felt safe with him, and that I wasn't sure if that's a good thing. He said, "Quit judging yourself for your emotions." I retorted, "But what if it isn't safe!" And he said, "What if it is."

What if it is. The truth is, I don't know. My gut says it is. And I'd rather go for it then hold myself back from feeling something. Is there a way to go for it and still be careful?
Posted by KT My Lady at Thursday, October 14, 2010